We pride ourselves on knowing the ins and outs of what we provide, not only giving expert advice and guidance but having a vast range of product knowledge to give you the best possible experience in payment solutions.

We have created our knowledge centre Bank Note Acceptors page to share some of our knowledge across a range of our products to help with any questions you may have. This may also assist you in helping you choose a suitable product from our catalogue. 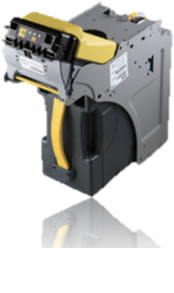 What do you want to do?

What does a bank note acceptor do?

Bank Note Acceptors (BNA’s) will test authenticity of a note inserted with high accuracy in a relatively short time via a number of optical and electromagnetic sensors. The more sensors that are fitted, the more reliable and faster operation a bank note acceptor performs and the more expensive it is. Nearly all BNA’s are single escrow which means that only one note can be accepted at a time, multi-escrow BNA’s are available but will be more expensive.

What should be considered when choosing a bank note acceptor?

Bank Note Acceptors (BNA’s) come in two physical forms, a stacker where the note is accepted, validated and then drawn along a motorised path and stacked in a cashbox. This provides a compact form factor and allows for easy handling of the notes. On the downside the capacity of notes that can be accepted is limited, cashbox sizes vary between 100 notes and 2,200 notes, also jams may occur as the note is transported to the cashbox. Stacker BNA‘s are usually available as a Up stacker where the body of the unit is above the note aperture or a Down stacker where it is below.

Stackerless BNA’s do not have a cashbox attached, once accepted the notes are pushed out the rear of the BNA and freefall into a cashbox that is not included as part of the unit. This means the size of the BNA is reduced over a stacker, the price will be lower and there is less risk of notes jamming as the transport path is much less.

You should consider what the BNA will be connected to, usual communication protocols for BNA’s are Pulse, Parallel, ccTalk, RS 232 or MDB, some manufacturers have developed their own protocols. Which protocol your application is communicating in will define what acceptors are suitable, some models of BNA’s have all protocols available but the more expensive BNA’s are usually RS 232.

Other factors to be considered

Each currency will need to have its own software (called a billset) to accept the notes within that currency, check the currency you want to accept is supported by the manufacturer and the individual notes are part of the billset, note that different denominations in most currencies are different sizes and the notes a BNA can accept will be constricted by the physical width and length of the notes.

If a new note is released for the currency you are accepting the BNA will need updating, most manufacturers will provide the new billset without charge but you will likely need either a programming cable and or special software to re-programme the unit, it is probably worth buying any supporting tools like this at the start.

What does a Bank Note Recycler (BNR) do?

This type of unit will accept and dispense bank notes, as well as storing the received notes in a cassette (like a BNA) it has the ability to store some of the denominations in a separate cassette from which it is possible to dispense notes. Thereby having the function of giving change on a larger note that has been accepted.

For example if a £20 was accepted and change of £15 was required it could dispense one £10 note and one £5 note back to the customer. The capacity of notes that can be dispensed will be limited by the size of the recycling cassette. If you need to dispense a large number of notes then a bank note dispenser may be a better choice.

Icons used on this website were sourced from Flaticon.